Since I've turned 23 a few months ago, I've been thrown numerous questions about when I wanted to get married and start a family. Before I dive into this answer and the meat of my thoughts, here's a little background on me. I am a college graduate of the Class of 2015 with a Bachelor of Arts in Biology, with a focus in Environmental Biology and Ecology. Currently, I am a graduate student in a Master's program designed to best prepare me to attend medical school in 2018. I will recieve my Master's of Science in Medical Science in May of 2018, before continuing my education at a medical school to later be determined (ask me this time next year where I'll be attending). I volunteer at a children's hospital, and assist a professor on campus with research. I also run a successful blog, The Mod Little Melanin, of which I am currently in the patent process, and am hoping to have the online boutique portion of The Mod Little Melanin up and running by July of 2017.

In other words, I'm grinding daily to reach my goals, and though I date, marriage is the last thing on my mind in my early 20s, and in my 20s, period. I'm broke. I don't work, to best focus on school. I live off of student loans and won't have a paying job until I begin my residency at age 29 (because working in grad and medical school aren't good ideas in my opinion). Marriage is settling down, and quite frankly, I'm NOT ready for that. And that is okay! I want to explore the world, travel with my girls, and be selfish for the time being. Someone told me perhaps "my feelings weren't strong enough amd that's why I don't long to be married in the near future." I smiled and told them to have a blessed day, and that they didn't know my life. Truth is, if I'm not financially stable, and he's not financially stable, and we're both sitting here trying to figure out how to stretch money till payday, there wouldn't be much benefit in being married and still being financially unstable.

I'm old school, so I don't plan to have kids until I've been married for at least a few years, meaning I probably won't have kids until about 33. Your twenties are supposed to be your selfish years, where you are supposed to enjoy your life, take risks, make mistakes, and learn all of your life lessons that will help strengthen your life as you grow older. I plan to use my twenties as the time to accomplish my goals. Once you have a child, that child comes first, and you come last. Your focus becomes the child, and you can't always reach your dreams in the ideal time because what is important is feeding, clothing and giving your child a safe place to live.

So how does all of this relate to gender roles? Society has conditioned women to believe that their focus in their twenties should be marriage and having a family. If you choose to focus on your career instead, society has deemed these women as selfish, less desirable, and ultimately not "following" the ideal gender role for their gender. Society has deemed that men are to be the breadwinners for their household, that they are to be in control, that they are to be decision makers and the dominant partner in the relationship. Woman are supposed to be submissive, listen to and respect the opinions of their spouse, and not have a voice. Recall when Ayesha Curry, spoke out on the referee situation in the 2016 NBA Finals, claiming that the games were rigged. Stephen Smith pitted Ayesha Curry and Lebrom James' wife, Savannah James against one another stating, that when Savannah attends the Cleveland Cavaliers’ home games, she “sits there. She doesn’t bring any attention to herself.” In general, Smith believed Ayesha, needed to be quiet and docile, not have a voice and simply be the wife and mother that she was supposed to be. He also dismissed Savannah James as being nothing more than a wife and a caretaker to her children. Both generalizations were ill-willed and disrespectful. Thankfully, social media responded negatively about the comments made by Smith. Unfortunately, many men think in a similar fashion to Smith.

Where did modern gender roles originate? There are many mentions of gender roles in The Bible, in which women are supposed to submit to man, simply because they were created from man. On a daily basis, most don't follow the scriptures of The Bible. However, when fitting, people love to remind society of the words of The Lord in order to knock down their advancement in society.
A recent tweet has been circulating featuring Cardi B, a cast member of Love and Hip Hop New York. In the tweet, Cardi B is wearing a pair of fitted jeans, a strapless top, with a lowcut neckline and a pair of Balmain sock boots, with the caption "Fellas yall okay with ya girl going out like this," as shown below. Reading through, some of the comments I came to a general consensus that some men believe they are to be in control of what their girlfriend or wife wears. When I posted the photo on my twitter, with the caption "We'd have to part ways if a man believed he could tell me what I should and shouldn't wear," I hit a nerve with a former classmate, who stated that it would be inconsiderate to not listen to the concerns of your significant other, you can read the full conversation on my twitter if you already follow me, as I won't go into detail here. My opinion is this, a man does not have the right to tell a woman how they should dress, just as a woman does not have the right to tell a man how they should dress. There is a difference between suggesting an outfit versus telling someone what they should wear, the latter being more on the spectrum of control (a statement I made that my classmate did not fully understand or acknowledge). Women are their own individuals and if a man feels entitled enough to verbally abuse and push a woman around by telling them what they should and should not do, that is a form of control, opression and a big red flag, as this form of control will only increase as the woman attempts to showcase their independence as a female. 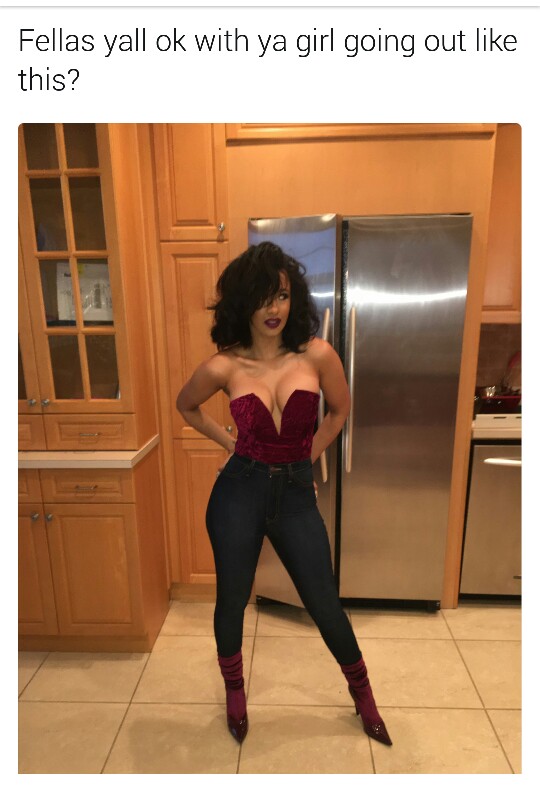 For years, women have taken strides to become the equal of their male counterparts. In the past, when I would tell guys who I talked to that I wanted to attended medical school after college, their response would always fall along the lines of "oh you'd make a great nurse." I've been told by men that medical school was far too big of a dream for me and would likely intimidate any potential husbands I would encounter in the future. As previously stated, my desire is to not search for a husband, but to instead build my career. In 2016, we had our first female presidential nominee, who won the popular vote in a Presidential Election (and probably the Electoral College too) but we still have so far to go to break the glass ceiling and prove that anything men can do, that women can do better. (White) Women are still paid 80 cents for every dollar that their white, male counterparts make. Women of color on average, make 60 cents for every dollar their white male counterparts make. As a black woman, seeking employment in the male dominated world of medicine, I am aware of the challenges and discrimination I may face from both colleagues and patients, but am prepared to handle what I may experience. I will continue to look for ways to fight for equal pay opportunities for women of color and medicine and pray that equal pay is a reality by the time I complete my residency, in 2026.

Women are more than childbearers who run the household while their husband brings in the money. Women run the world, they bring forward new life, and should be entitled to any career aspirations that their heart desires. Women can be anything they want to be, and are no less of a women if they never marry or bare children. Anything a man can do, a woman can do better, and I challenge you to find a career woman have no business being employed in.